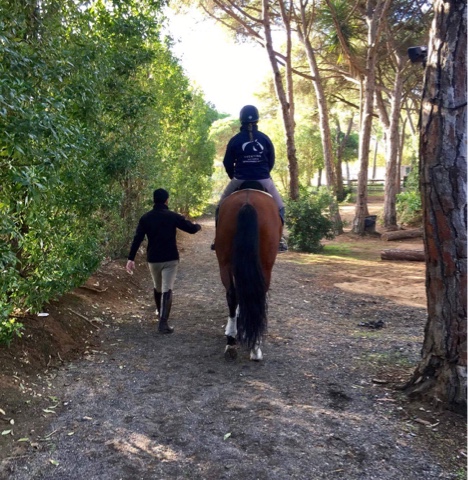 Sunday started off ok, with a beautiful sunny morning and a ride on Hostil. After warming up, he gave me some nice work, getting softer with a good rhythm. One of the things we worked on was flying changes, which I find a bit tricky and want to do too much! Single changes across the diagonal went ok, then we started to attempt 2 and 3 changes across the diagonal of a 20 x 40 arena...which is where things fell apart a bit! I forgot about sitting still and maintaining quality of the canter....and Hostil started anticipating and getting a bit strong and quick. We then broke the exercise down into two changes across two short diagonals....then got 3 changes across the diagonal....finally! It was a good lesson for me as I have been starting changes with my horses at home - with mixed success. Frederico gave me some good exercises to try, so will be putting these into place when I get home.

Ulisses and Vingador in the background doing kids' lessons :) 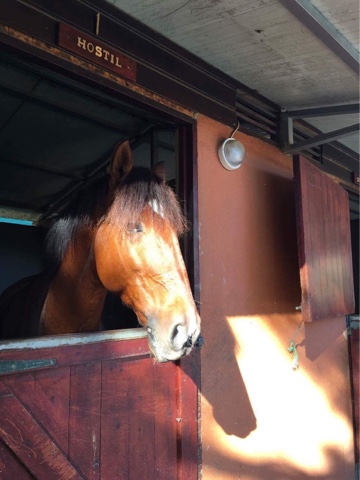 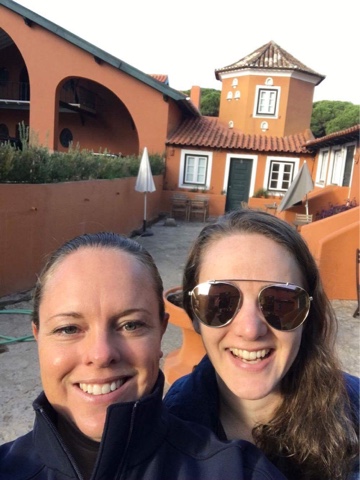 Trains, planes and automobiles
After farewelling Julia (who was off to spend the afternoon in Sintra) I began the journey to London. I arrived at Lisbon airport, with plenty of time. Checked in, all good. Got to boarding gate before 12:45 only to be told...."oh, we don't have a seat for you"
Say Whaaaaaaaat? *insert long line of expletives*
I have to admit, I was flabbergasted - I've never had this happen.
It turns out that TAP Air Portugal regularly overbooks flights. I was an unlucky one to be "kicked off". The (not very friendly) boarding gate lady told me to go organise a 4pm flight, but to do so, I had to get all the way back through the airport backwards....not easy when you've already been through security and passport control. I had to find ground staff on a few occasions to let me through staff doors, passport control (again!) and finally a tearful stressed out me found my way to the TAP desk back near check in...to be met with a huge line up. It took close to 2 hours wait in line, where I discovered many others had the same issue with other flights...some poor travellers were kicked off a flight to Rio they'd paid for in June! I also wasn't sure what had happened to my suitcase I checked in that morning....another worry!
Anyway, I finally got a boarding pass issued for the 4pm flight, given a card for 400 Euro and was assured my bag would be on the flight.... then had to go through security screening againnnnnnnn (time was getting tight by then)....get to passport control and I think, because I had already "departed" it would not accept my passport in the Australian/NZ etc e-gate. I then had to join a huge line up and started panicking. Very kindly, people on later flights let myself and others on the London flight jump the cue. There was NO way I was missing that flight.
I arrived in London, got my bag (hurrah!) and then took the easy option of the airport desk organising a hotel and transfers. By that stage, it was after 8:30pm and getting a late train wasn't an option (I actually think I missed the last train option). I was tired anyway, after such a long day stuck in an airport. I finally had dinner at 10pm (after having nothing to eat since breakfast) and went to bed, and slept well, but was up again before 5 am.
And to today....I checked out of the hotel at 5:20am to catch the bus to the airport station....plenty of time to get to Paddington for me train to Totnes, right? Wrong! One of the tube lines was down causing delays on other lines. I got to Paddington at 7.03, when my train was scheduled for 7.06...no time to buy tickets etc....so here I am on the next train and will arrive an hour later...but I'll be happy to arrive at all.
Let's hope the week improves.....!
Posted by Haybale Blogger at 09:52