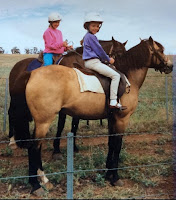 For as long as I can remember, I was a horse-mad child. Despite living on a large rural property, I had parents with very little horse knowledge. We had sheep, cats and dogs, but sadly for me, no horses.

﻿﻿
My mother kept my pre-school scrap books which feature many drawings of stick figure horses I drew. Every time I went on a school trip, I was the strange kid craning my neck towards the window to catch a glimpse of any horses we might pass. I read every practical horse book in the school library to learn more about horse care and riding. I then discovered British pony books. Pullein-Thompson, KM Peyton, Ruby Ferguson - I loved them all and desperately wanted to be the characters in those books.

This seemed like FOREVER away as a little kid and by the time I was nine, I wore my parents down and was allowed to take riding lessons.

The summer of 1989 is where it all began. I remember getting out of the car at "Biggin Hill" for the first time and seeing a pony mare saddled up ready for me to ride. She had a glossy, dark golden coat, yet a black mane, tail and legs.

"What an unusual colour" my mother remarked. We were informed she was a buckskin and her name was Della. I immediately thought she was the most beautiful pony I'd ever seen.

Mrs Manuel and her granddaughters, Simone and Justine taught me to ride. I remember being helped on board using a mounting block (I was not a very tall nine year old) and shown the basics of control in a small yard. I then proceeded to go out for a ride along the lanes and paddocks, with Mrs Manuel on her grey, Quest and another girl, Donna on Fred.

And so went this glorious Summer. I spent many days of the school holidays, riding out with whoever was there. I happily recall mastering the rising trot in the "laneway" and on a particularly happy day, finally cracking a canter with Mrs Manuel riding beside me. I fondly remember the warm mornings spent with the horses, only to be reluctantly whisked home before the heat of the day. We'd often take a short cut, through Woolshed Lake, red dust of the dirt roads flying in our wake. With the car's air conditioner blaring and my sisters' Peter Coombes cassette playing, I would feel tired, yet contented. Around this time, I started collecting the "Horse Sense" magazine series. Afternoons were often spent brushing up on my equestrian knowledge. It was one of the happiest times of my life.

One particular day, I was hacking out along the lanes with Donna and Justine. Donna and I begged to be allowed to canter towards home, but were (rightly) told we weren't quite ready for that! It was on this ride I said to Justine we were looking for a pony and she mentioned Della was for sale. The seed was planted. In truth, the whole family had quite fallen in love with the gentle little mare. We'd take her apples (the only treat she liked) and she placidly walked as my younger sisters took turns in having a ride.

Once it was decided Della would become ours, I then had to suffer (or so I thought!) the inconvenience of going to ballet camp. It was a torturous week for me. It was my first longer camp away from home and I was so desperately homesick, to the point of constantly crying. I don't ever remember wanting to go home so much! I also would have much preferred to be spending every waking minute with my pony, not dancing. It was then my love of ballet began to wane....

Although we were now owners of Della, she remained at Biggin Hill as we didn't yet have a paddock suitable. Now she was mine, it meant a glorious trip to the saddlery store with Mum to equip her. I was in seventh heaven, selecting a saddle and bridle, halter and lead, grooming kit and other supplies. As we ate lunch in the car, I recall thinking that the smell of new leather was one of the best scents in the world.

Once school resumed, on weekends we'd go out to see Della, ride her and smother her in affection. It was on one of these rides I fell off for the first time, when Della cantered towards the fence and suddenly stopped.

I believe that was the last time I rode her. Not long after, we had a phone call to say she'd had colic. The local vet had been and she seemed ok. I went off to school that   day thinking everything was all ok. When I got home that afternoon, my whole world changed.

I stepped off the school bus to see Mum's tear stained face. It could only mean one thing.

"Did Della die?" I whispered

Mum collapsed into tears. Tears of pain of knowing there was no way of easing my grief. It was my first big loss and left me shell shocked. One day, I had everything I'd ever wanted in life; the next, it was gone.

It transpired that Della's colic symptoms had returned that day. A twisted gut was suspected and my parents made the decision to have her operated on. In hindsight, a bold move. Unfortunately, when she was opened up, it was revealed she actually had a fatty tumour on the bowel. Blood supply had been cut off and although they removed what had been damaged, they were unable to re-join the bowel.

To this day, I am still haunted by such a tragic beginning to horse ownership. Of course, I have gone on to have many other wonderful ponies and horses in my life, but it was a rocky start.

These days I am blessed to be able to help many people onto the start of their equestrian journey. Part of me will always be that horse-mad little girl, staring out the bus window for passing horses and cantering across paddocks, carefree, wind in my face with those buckskin ears in front of me.
Posted by Haybale Blogger at 17:49