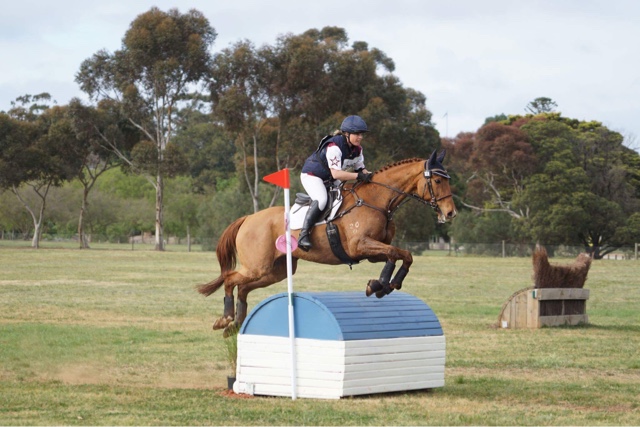 Photo credit: Equine Focus Photography
As mentioned in my last installment, the poor old motivation has taken quite a beating of late. I was wondering why I've been finding eventing SO much harder this spring - this time last year I was still on maternity leave, so although I had two smaller children, I didn't have the added time pressure of working for an employer. Lately, I've been clocking up 20 hrs in the office per week, so juggling this with two very busy small children and then teaching in whatever time I have left, it is any wonder I feel like I'm burning the candle at both ends. It has also really put a dent in my own riding time, which used to be my number one priority. If I can't do things properly, I don't really feel like doing them at all, such is my nature.....and why I've hit a slump motivation wise.
That aside, I had a good weekend with Snip at the Prydes Eventing Victoria Spring Horse Trials a fortnight ago. He put in a solid dressage for 65.8% and then jumped double clear in SJ & XC, to finish 5th in a strong EvA105 class, also taking home the best performed OTTB.
I was then relatively psyched up for Candlebark HT, marking a return to 1* level. We were 10th after dressage, on 63%, which I was happy with. However, upon walking the cross country course, my heart sank. The ground was a lot harder than I expected, and the course ran up and down quite undulating country. Given neither of us are at peak fitness and Snip does not like hard ground, I decided to withdraw and save him for another day. With no qualifers needed, and now at 17 years old, he did not need to run. I think I made the right call, as the XC caused lots of issues. We'll be back!!
I too, really needed a day at home to catch up on sleep, hang out with the kids and just "be". As my kids have grown older, they've started to really miss me when I'm away competing, which tugs at the heartstrings. I'm already away enough with work, which adds to my conundrum. There's not enough hours in a day. :(
So, Snip is now on a spell for a while and I'm taking a break from eventing until March 2018. A perhaps bold move, but with every cloud, there's a silver lining. Some time out from competition will enable me to have more time at home with the kids, to solidly train my younger horses and to reassess my riding and coaching goals. There's lots of exciting stuff in the pipeline for me soon - including some coaching professional development to improve and broaden my services to clients next year. It is possible to "have it all" - just not all at once. ;) Now is the time for laying those foundations, brick by brick.
Watch this space!
Posted by Haybale Blogger at 22:09